“We recognize that California is in the midst of extraordinary dry conditions, forcing Reclamation to take a measured approach to balancing regulatory and contractual obligations for the Central Valley Project.

Today’s announcement unfortunately creates additional uncertainty and financial strain on growers in BBID’s CVP Service Area. The time to purchase crop insurance has come and gone, and crops are already in the ground.

The District will pursue water transfers to meet the needs of our growers, albeit at a much higher cost than CVP water.

We appreciate the Bureau’s commitment to preserve its initial allocation as hydrology continues to worsen. Our second straight dry winter — punctuated by a lack of significant snowfall during the month of March — makes it all the more challenging to meet the complex, diverse water needs of the state.”

Reclamation’s announcement preserves the allocation announced in February, but delays access to that water.

“We wish the initial allocation were higher, but we recognize the difficult position Reclamation is in given the lack of precipitation,” said BBID General Manager Rick Gilmore. “In recent years, we have seen two extremes of California weather: record drought and record-setting rain and snow. Meeting the water needs of our growers – and the state – is a problem best solved with flexible, multi-year resource management based on our latest science.”

“It demands investment in the upkeep and restoration of our critical water facilities, in the enhancement of our ability to store water when it’s plentiful for the next drought we know is coming, and in common sense policy that removes bureaucratic hurdles,” Gilmore continued.

“Healthy and sustainable food production is a national security issue and the Authority’s member agencies serve the urban and agricultural communities that grow a significant portion of the nation’s plate,” said SLDMWA Executive Director Federico Barajas. “As a community, region, state and country, we need to work collaboratively to improve the resilience of California’s water system in a balanced way, particularly with the implementation of the Sustainable Groundwater Management Act. Authority staff will continue to work with Reclamation and its member agencies to analyze hydrologic conditions in hopes the allocation can be increased as early as practicable.”

In a news release, Reclamation said it will continue to monitor hydrology as the water year progresses, looking for opportunities for operational flexibility.

The full report, which details the latest perspectives on CVP issues including constraints on water deliveries, ecosystem restoration efforts, new storage and conveyance, and legislation, is below.

Sacramento, CA (May 19, 2020) – Today, the U.S. Bureau of Reclamation (Reclamation) issued an updated, increased water supply allocation of 20% for South-of-Delta Central Valley Project (CVP) contractors, including the Byron-Bethany Irrigation District (BBID). The initial allocation had been set at 15%.

“During these unprecedented times, we must remember that reliable water supplies are the foundation on which community and economic health is built.

This year’s lack of rain and snowpack has challenged Reclamation’s ability to meet the multiple needs for water deliveries from the Central Valley Project – agricultural water supply, water for ecosystems and threatened species, and water for California’s urban populations.

The San Luis & Delta-Mendota Water Authority appreciates Reclamation’s ability to carefully strike a balance, given the challenging conditions. The reliability and quantity of surface water deliveries directly impacts the amount of groundwater that is used to produce the food we eat and the water we drink.

Today’s announcement of a water allocation increase has positive benefits for California communities and its environment and reduces the reliance on groundwater aquifers in the San Joaquin Valley.”

BBID is a member agency of the SLDMWA, which serves 28 member public agencies, 25 of which contract with Reclamation for water supply from the CVP.

In a news release, Reclamation credited spring storms for the increased allocation.

“Thanks to April precipitation showing a sizeable water supply improvement for the American River watershed, Reclamation is pleased to announce this increased allocation for CVP water contractors south-of-the Delta,” said California-Great Basin Regional Director Ernest Conant. “Even with the recent gains in water supply, the year as a whole has still been relatively dry. Reclamation will continue to monitor conditions and adjust accordingly. We urge our contractors to continue to exercise conservative use of the resource.”

On Tuesday, Secretary of the Interior David Bernhardt addressed recent litigation filed by the State of California, in relation to the operations of the state and federal water projects.

In the below letter addressed to Senator Dianne Feinstein, Sec. Bernhardt responded to recent letters written by Governor Newsom and Senator Feinstein regarding California water management.

After a promising start to winter, dry conditions have returned across California. It has rained more in February in Death Valley than in Sacramento. The statewide snowpack is below average, and the long-range forecast indicates the lack of rain and snowfall may continue. 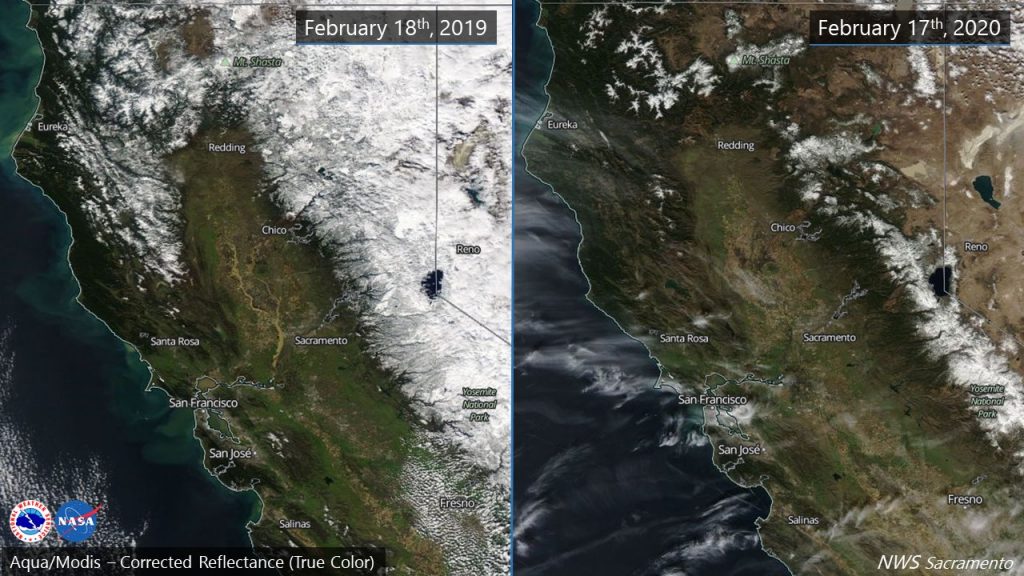 This image released by the National Weather Service, illustrates the dramatic difference between this year and last year’s snowpack.

“While we certainly wish Reclamation was able to issue a higher allocation, we recognize they must be responsive to our state’s current conditions,” said BBID GM Rick Gilmore. “The looming threat of the next drought underscores the need for adaptative water management. Implementing the new biological opinions abandons an outdated, restrictive approach in favor of real-time, cutting-edge science to best meet the needs of cities, farms and the environment.”

For the first time in a decade, updated biological opinions were issued last week. Those federal rules govern water use through the Sacramento-San Joaquin Delta. Had those biological opinions been in place last year, it is estimated that the projects would have been able to save more than one-million acre-feet of additional water. That would be tremendously valuable in any year, but especially in a dry one like 2020. At a 15% allocation, growers in BBID’s CVP service area will have a baseline water supply of just 0.51 acre-feet of water per acre – down from 3.4 acre-feet per acre with a full allocation.

“This initial allocation also underlines the need for investment in our water systems, including increasing storage to save more water during wet years for use during dry ones; and more conveyance to move water more flexibly, ensuring reliability in the face of increasingly unpredictable, extreme weather patterns.”

Byron, CA (April 17, 2019) – Today, the U.S. Bureau of Reclamation (Reclamation) announced a slight increase in the allocation for South-of-Delta Central Valley Project (CVP) contractors, to 65%. This comes at a time the state’s snowpack is so dense it’s been referred to as a “water supply dream,” and every reservoir used to supply South-of-Delta operations is above 100% of normal.

“Despite an overly abundant water supply,” said BBID GM Rick Gilmore, “this incremental increase is essentially a drop in the bucket. If we can’t even get close to a full, 100% supply this year – then when, if ever?”

“The snowpack surpassed 160% of normal in the northern and central Sierra Nevada,” Gilmore continued. “Meanwhile, reservoirs are in flood control operations. And yet, our growers and ranchers are still being forced to make do with less than their fair share.”

At the outset of the 2019 growing season, the uncertainty created by continually delayed allocation announcements makes it extremely difficult for farmers to plan their operations.

“Reclamation staff understands the challenges and difficulties these decisions create,” Gilmore said. “However, they are boxed in by the biological opinions in the overly-protective Endangered Species Act, which imposes significant restrictions on available water at a time there is more than enough to go around. To add insult to injury, the restrictions that have crippled CVP operations for so long have provided none of the intended benefits to fish species, which continue to decline despite the severe impacts the biological opinions are having on people. We also are concerned that SB1, newly-proposed legislation, may make this problem worse, not better.”

“Never has the problem – and solution – been clearer,” Gilmore said. “It is beyond argument that these runaway regulations must be reigned in. Until then, the CVP can’t fulfill its primary purpose: supplying water to those who supply much of the nation’s food.”

This month, California has seen 18 trillion gallons of precipitation – enough to fill Lake Shasta 12 times. Our snowpack is well above normal. Runoff into many of the state’s main reservoirs this year is projected to be as much as 1.1 million-acre-feet higherthan at this time in 2012. Mother Nature is doing her part.

These overly conservative, low initial allocations unfairly burden the District’s growers and ranchers. They struggle to make informed planning decisions in the face of an uncertain water supply. BBID continues to work for constructive, collaborative reviews of existing regulations, and to ensure that the latest science is put to use for water allocations that impact BBID and the entire state.”

U.S. Secretary of Interior: “Time for Action is Now”

In a move met with widespread praise and hope in the Central Valley, the U.S. Secretary of the Interior called on federal agencies to act to fix the broken Central Valley Project (CVP). Secretary Ryan Zinke’s memo on Friday directs the development of an action plan to maximize water deliveries and shore up operations of the federally-managed CVP, which Zinke described as being in “…a desperate state of disrepair.”

“For our growers and others in the Central Valley who have borne the brunt of failed policy and mismanagement, this is welcome news,” said BBID GM Rick Gilmore. “The District wholeheartedly agrees with Secretary Zinke: the time to take action is now.”

Growers in Byron-Bethany Irrigation District (BBID)’s CVP service area faced three consecutive years of zero-percent allocations. Even now, with many reservoirs at or above 100% of normal, the South-of-Delta CVP allocation began in 2018 at a mere 20%, and has since climbed to only 45%.

Secretary Zinke’s plan calls for maximizing water deliveries by incorporating the latest and greatest science into the decision-making process. It also includes the construction of new storage for the CVP, a “major source of farms, families, industry and fish and wildlife in California.”

Under the current CVP operation, he wrote, “communities have been harmed, productive land has stood fallow, and the populations of fish these particular water delivery limitations were intended to protect have seen no meaningful improvements.”

“The Secretary’s bold action renews hope for a more equitable approach,” Gilmore added. “We must restore reliability to strengthen the CVP. It is time to consider the reoperation of the Federal and State water projects to provide that much-needed balance.”

The Secretary allotted 15 days to develop an action plan, and ordered the Office of the Deputy Secretary make final recommendations within 10 days of receiving the report.

The full memo is below.

“The Bureau’s latest allocation increase amounts to a drop in the bucket for BBID’s farmers, who should have been able to count on a much more robust supply in a year like this. The statewide average for CVP reservoirs is more than 100 percent of normal, just one year removed from the wettest year on record.

The still-low allocation – which began at 20% and has gradually increased to 45% – shows that the greatest challenge to reliable CVP water deliveries is our regulatory climate, not Mother Nature.

We join our partners at the San Luis & Delta-Mendota Water Authority (SLDMWA) in calling for change. Overly conservative and restrictive CVP operations create unnecessary hardships not just for farmers, but for the entire state. If the federal government can’t supply requisite deliveries even with abundant supplies, then clearly, the system is broken.”