Byron, CA (May 17, 2016) – For the first time in more than two decades, Byron-Bethany Irrigation District’s (BBID) Board of Directors voted Tuesday to authorize an increase to the District’s uniform, agricultural water rate. The move comes in the midst of BBID’s ongoing legal battle with the State Water Resources Control Board (SWRCB) to protect BBID’s senior water rights, at the same time the District stands to lose hundreds of thousands of dollars in property tax revenue.

“We know it will be difficult for our farmers and ranchers to shoulder this additional burden,” said BBID General Manager Rick Gilmore. “BBID has been able to keep the same, low rate in place for more than 20 years, but recent events made today’s action unavoidable to protect the financial stability of the District.”

Earlier this year, Contra Costa County moved to pursue detachment of portions of the town of Discovery Bay from the BBID service area, an area that generated $685,000 in annual property revenue. BBID expects to lose half of that revenue in 2016, and the full amount by 2017. Meanwhile, the SWRCB’s attack on BBID’s water rights has resulted in an expensive – but critically necessary – legal fight to protect the pre-1914 water rights that provide the foundation for the District’s reliable water deliveries its growers depend on.

Tuesday’s vote at the end of a public hearing concluded the Proposition 218 process that began with a cost of service study by an independent rate consultant. Based on the consultant’s recommendations, the Board authorized a 2016 agricultural water rate no higher than $102 per acre foot, but ultimately decided to set this year’s rate at $65 per acre foot, opting to use financial reserves to soften the blow to BBID’s growers. The previous rate was $20 per acre foot. The change will take effect on June 1st.

In other business, the Board announced general counsel Dan Kelly is moving on at the end of this month, leaving private practice to join a public agency. Kelly was presented with a framed resolution recognizing his dedicated service the past several years.

“Dan’s tireless passion and unparalleled legal expertise will be missed,” said BBID Board of Directors President Russell Kagehiro. “Right now, we are fighting to protect our water rights – fighting for the very future of our District, and Dan has led that charge. For that, we will be forever grateful.”

Byron-Bethany Irrigation District prepared a Proposition 218 Notice to inform its customers of a potential rate increase. Click here, or below, to read the full notice. 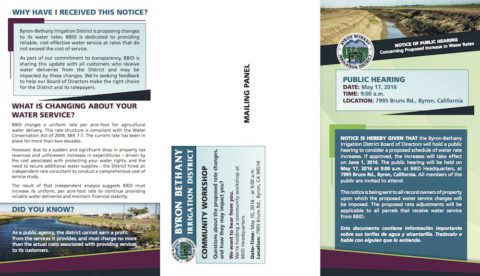